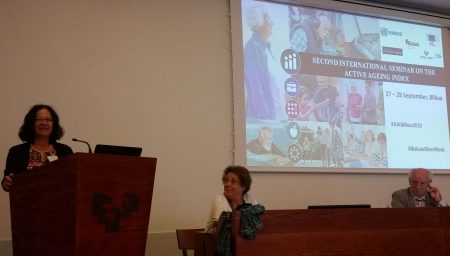 It’s good to grow old in Israel, according to a recent international ranking. In fact, Israel ranks second among 28 European countries on the 2016 Active Ageing Index, just below Sweden and ahead of Denmark.

These findings were part of a presentation by Dr. Ayelet Berg-Warman, senior researcher in MJB’s Aging Research Team, at the Second International Seminar on the Active Ageing Index (AAI) in Bilbao in September. The seminar, held under the auspices of the United Nations Economic Commission for Europe, brought together researchers, civil society representatives, policymakers and other stakeholders and provided a multidisciplinary forum for those interested in the use of AAI to enhance the knowledge about ageing and older people and lead to the development of better policies.

The AAI was developed in 2012 as a tool to measure the untapped potential of older people for active and healthy ageing at national and subnational levels. It measures the level to which older people live independent lives, participate in paid employment and social activities as well as their capacity to actively age. The index is constructed from 22 individual indicators that are grouped into four domains. Each domain reflects a different aspect of active ageing. AAI also offers breakdown of results by sex to highlight the differences in active ageing for men and women.

“The Institute partnered with the government to construct Israel’s indicators,” Berg-Warman explained. “First, we identified all the potential national sources of relevant data about ageing in Israel, and then we calculated the AAI for Israel according to the methodology developed by the expert group of UNECE and compared it to other countries.”

According to Berg-Warman, a number of indicators helped boost Israel’s ranking. For example, Israel scored considerably higher than its European counterparts in the employment domain, thanks to the high employment rates of Israelis over age 60. Israel was also higher in the “participation in society” domain. Berg-Warman attributed this to the high proportion of individuals over age 55 who care for their children or grandchildren (52% in Israel, compared with 26% in the European countries).

Despite Israel’s relatively high international ranking, Berg-Warman noted that there remains internal gaps between the country’s center and periphery across all domains. The most prominent gaps were found in the employment indicators, reflecting higher education levels of older adults and the greater employment possibilities in the center of the country.

Overall, the trend data shows that the situation of Israeli seniors in Israel has improved over the past decade, yet at the same time the gaps between center and periphery are also widening notwithstanding policy efforts to counter this. For Berg-Warman, this suggests the importance of ongoing monitoring and evaluation of policy development to maximize the effectiveness of new programs and services.

Loneliness among the Elderly