The Myers-JDC-Brookdale Institute (MJB) has since 1995 been monitoring the functioning of the health service from the perspective of insurees, aged 22+. The findings of the survey for August-December 2016 on insurees switching health plans (HPs) are presented in brief below: [1]

About half of those who had considered switching (but did not do so) cited procedural reasons (no desire to deal with the process or with the bureaucracy  involved, loss of rights and so forth). Consequently, in our view, access to accurate information on the different means to switch HPs (i.e., through the Internet) and on the laws regulating insuree rights when switching (i.e., the cancellation of waiting periods for supplementary plans and long-term nursing care), the main barriers to mobility within the system would be removed.

Another interesting statistic refers to insurees who did change their HP; a fifth did so in order to be treated by a specific physician working with the other HP. Some of these insurees reported switching to follow their family physicians. Of those who had considered switching but did not do so, a tenth reported remaining in their current HP to continue to be treated by a specific physician, especially a family physician.

By Israeli law, all citizens or permanent residents must be insured in one of the HPs and may choose which one. In recent years, the procedure of switching HPs has been simplified (e.g., by means of the Internet) and switching does not affect an insuree’s rights. The purpose of the latter measure was to permit greater system mobility and encourage competition.

A report by the Ministry of Health (MoH) on moving between HPs in 2017, published in November 2017, stated that a total of 2.2% insurees had done so.[2] To date, most of the switches have been made by regular mail although the Internet is becoming increasingly important in this regard. In the past year, most of the insurees who switched HPs, did so to Clalit although many insurees left it as well.

The highest net number of insuree switches (incoming minus outgoing transfers) was to Maccabi. The report also showed that in 2016, localities with a low socio-economic status (cluster 1) and a geographically peripheral status (cluster 2) had a relatively high rate of switching compared with the national average (4.4% and 6.7% respectively).

How many insurees switched health plans – and why?

All the interviewees were asked: “In the past five years, how many times have you switched HPs?” Insurees who said that they had switched, were asked for their main reason for leaving their previous HP. 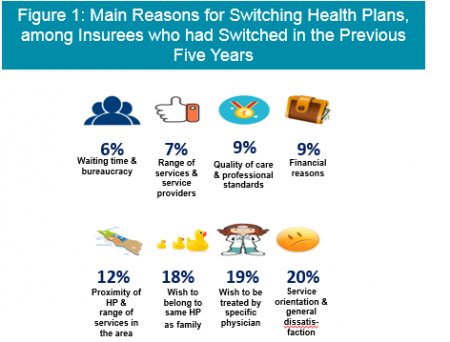 How many insurees had considered switching health plans?

Another question directed at the interviewees was: “In the past five years, did you consider changing to another HP but did not do so?” All those who had considered switching were asked for the main reason that they had ultimately not done so. 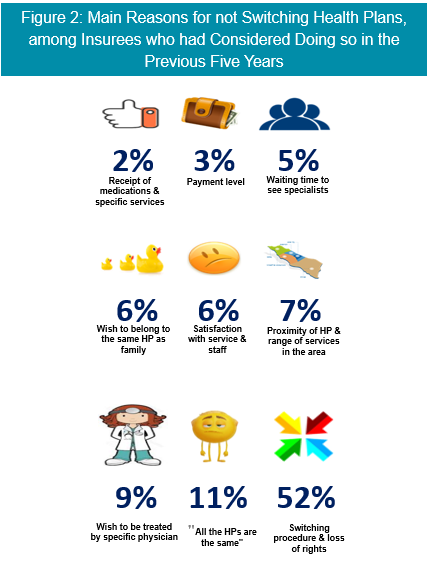 MJB has been following the functioning of the health system from the perspective of insurees since 1995. The most recent survey was conducted in August-December 2016 under Dr. Shuli Brammli-Greenberg, Tamar Medina-Artom, and Alexey Belinsky. It was supported by a steering committee representing the HPs, MoH, Ministry of Finance, NII, and consumer organizations.

Data collection was performed at MJB accompanied by the research team, under the Data Collection Unit headed by Chen Tzuk-Tamir and assembled by Lev Zhivaev. The sample was representative of Israel’s adult population (aged 22+). In 2016, mobile-phone owners were included in the sample. Interviews were conducted of 2,513 people in three languages (Hebrew, Arabic and Russian), with a response rate of 68%. The sample characteristics resembled the population characteristics according to data of the Central Bureau of Statistics, MoH, and NII. Age was weighted to arrive at a precise representation of the different age groups.

A summary of the full survey can be found at: http://brookdale.jdc.org.il/?CategoryID=177&ArticleID=810

The methodological appendix can be found at:

[1] The differences presented in the document are all statistically significant unless stated otherwise.

[2] Brenner-Shalem, Keini and Kedar (2017), “Mobility between Health Plans 2017 – For whom and what do the health plans compete?” Administration for Strategic and Economic Planning, Ministry of Health, Jerusalem. https://www.health.gov.il/PublicationsFiles/Switching_between_HMO2017.pdf (Hebrew)